This is the third of the series of five Āi nǎi (欸乃) poems. They were written in 767CE.

The poet was on his boat journey sailing upstream from Zhǎng Shā (長沙) back to Dào Zhōu (道州). The maple forests by the side of the river are picturesque. In addition to the sounds of monkeys in the mornings and evenings, the singing of the boatmen echoed among the poetic scene. However, the water in the river was rapid and the journey was rough. The 5 poems were impromptu work to encourage the boatman to persevere with their heavy work.

Yuan Jie (元結) (719-772), also known as Cì Shān (次山), Màn Láng (漫郎) and Ao Sǒu (聱叟) was a famous poet in the Tang Dynasty. He was a native of Henan (河南). Yuan passed his imperial Chin-shih examination (登進士第) in 753 and was granted some posts in the government. He fought against Shǐ Sīmíng rebels (史思明叛軍) and was promoted to the post of Governor of Dào zhōu (道州刺史). Yuan has many merits. His poems reflect the harsh lives of the people and the evil and corruption of the government. He spoke out for the people. His poems of sceneries (山水詩作) were fresh and innovative. Unfortunately many of his writings have been lost. Scholars in the Ming Dynasty collated his works into Yuán Cì-shān Jí (元次山集).

Professor WONG Wai Cheong (黃維琩教授) (1902 – 1993), zi (字) Xīn Yuán (欣園), hao (號) Zǐ Shí (子實) was a well-known Chinese literature scholar and Calligrapher. Coming from a highly educated family, Mr Wong graduated from Guangzhou Zhongshan University (中山大學) with degrees. He was both a lawyer and a certified accountant and he held senior positions in the Guangzhou government. Mr Wong migrated to Hong Kong around the 1950s and taught at various secondary and tertiary education institutions. His contributions to Chinese education were significant. He had publications of his own poems and lecture notes.

The format of this long and narrow scroll is known as qín tiáo (琴條) or tiáo fú (條幅). The shape looks like a gǔ qin (古琴) hung vertically on a wall. 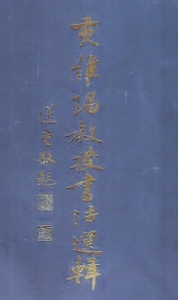