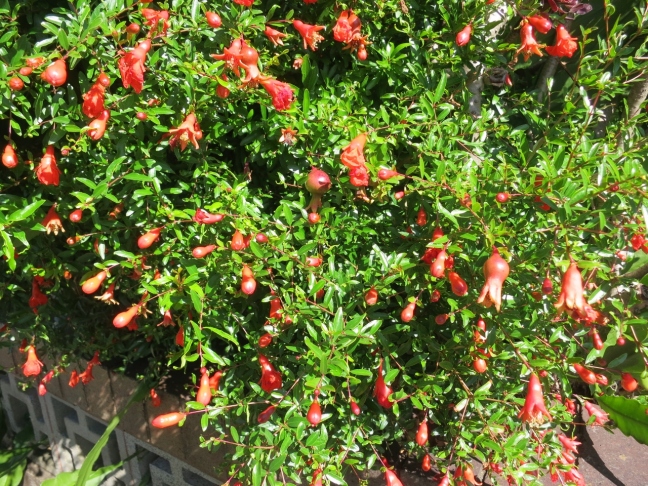 The pomegranate (石榴), botanical name Punica granatum, is a fruit-bearing shrub or small tree belonging to Order Myrtales and Family Lythraceae. Pomegranate is grown for its fruit crop, and as ornamental shrubs or trees in parks and gardens.

The pomegranate originated in the region of modern-day Iran and has been cultivated since ancient times throughout the Mediterranean region and northern India. It is believed that pomegranate was introduced into China by Zhang Qian (張騫)(200 CBC – 113 BCE). Zhang Qian was a Chinese official and diplomat to the part of Asia west of China in the Han Dynasty (漢朝).

Pomegranates were brought to China along the route of the Silk Road. They were introduced to Spanish America in the late 16th century and to California in 1769 by the Spanish settlers.

The flowers are bisexual, terminal and solitary. The calyx is tubular at the bottom and with 6 calyx lobes (sepals). It is reddish orange in colour. The corolla is made up of 6 reddish orange petals emerging from the edge of the calyx tube. Stamens are numerous emerging in many whorls, the filaments are distinct, and the anthers 2-celled, dorsifixed, dehiscing longitudinally. One single pistil; the ovary is said to be inferior as it is situated below the corolla, stamens and most of the calyx. The ovary forms a many-chambered and many-seeded fruit.

It is believed that the many-chambered and many seeded fruit originated from two whorls of basal carpels . During the development of the ovary the outer carpels become tilted up and superposed. The result is that two layers of chambers are formed. The outer or upper ones occupying a parietal position. 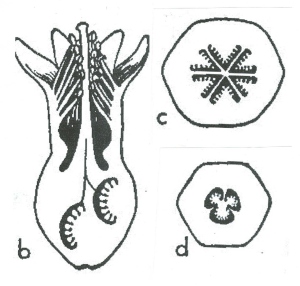 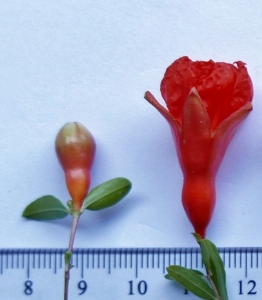 The above three images can be commonly found in Chinese paintings as pomegranate is a popular symbol of fertility and numerous progeny.

A study of commercially-grown pomegranate fruit from USA

The vertical section of the fruit shows a few chambers of carpels inside with numerous seeds. The placentation of the seeds in the upper chambers is parietal whereas those in the lower chamber is axile.

In the Northern Hemisphere, the fruit is typically in season from September to December, and in the Southern Hemisphere from March to May. The fruit is fleshy with many seeds inside. Each seed has a surrounding water-laden pulp — the edible arils (a specialized outgrowth from a seed that partly or completely covers the seed). The arils are used in cooking, baking, making drinks and as meal garnishes.

Pomegranate seeds are used as a spice known as anardana commonly used in Indian and Pakistani cuisine.

Pomegranate has medicinal uses as folk medicine in China, India and some other Asian countries.

Ancient Egyptians regarded the pomegranate as a symbol of prosperity and ambition.

In Ancient Greek mythology, the pomegranate was known as the “fruit of the dead”, and believed to have sprung from the blood of Adonis (a central figure in various mysterious religions).

Pomegranate has been widely considered an emblem of fertility and numerous progeny.

Chinese paintings of the pomegranates throughout the centuries

I would like to thank Miss Joanne Lam for giving me some good images of the flowers and for her continuous support.