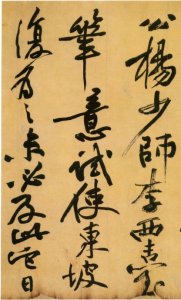 This poem of Dōng Pō is like the poems of Lǐ Bái, perhaps Lǐ Bái might not be as good as Dōng Pō.

If Dōng Pō rewrites this piece again, the new piece may not be as good as this.

If in the future, Dōng Pō sees what I have written, he will laugh at me saying I call myself the supreme one in the absence of Buddha. (Huang meant that he was not worthy to make comments on Dōng Pō ’s work.)

Su Shi composed the two poems of Han Shi (寒食詩) in 1082 when he was 46 years old. Some scholars think that Su put these two poems in writing after one or two years. The masterpiece passed through various collectors. In 1100, Zhāng Hào (張浩) of Shǔ Zhōu (蜀州) showed this masterpiece to Huang Tingjian  (黃庭堅) in Méi Zhōu, Sìchuān (四川眉州) when Huang  was 55 years old. Huang was overjoyed and highly emotional when he saw this masterpiece and he wrote a colophon for it. At that time Su was in exile to Hǎinán (海南島). This scroll containing the two most revered work of Su and Huang has been greatly treasured. It is now kept in the National Palace Museum, Taipei (國立故宮博物院).

Huang Tingjian passed his imperial Chin-shih examination (登進士第) in 1067 and was granted some posts in the government. At the time, there were two major parties, a “reform” party lead by Wang Anshi (王安石) and a “conservative” party, which included prominent officials such as Sima Guang (司馬光), Ouyang Xiu (歐陽修) and Su Shi (蘇軾). As Emperor Shenzong (神宗) increasingly favoured Wang Anshi’s New Policies, as they were known, their opponents suffered politically.  This included exile for Su Shi, beginning in 1080 to Hangzhou. Huang Tingjian was falsely accused of conspiracy. After 1086, Wang Anshi’s party was out of favour, and Wang Anshi himself was forced into retirement. Huang and other exiles were recalled from their places of banishment.

However, Su Shi and Huang Tingjian were repeatedly caught up in the political in-fighting in the Imperial Court and had to endure several cycles of exile and pardon.

Appreciation of the elegance of some words 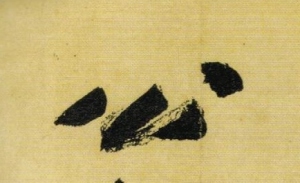 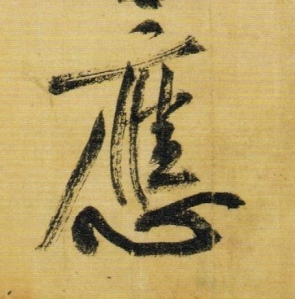 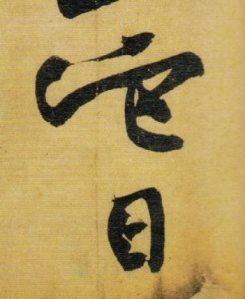 The three great calligraphers mentioned in the colophon

Yan Zhenqing (顏真卿) (709–785) also known as Duke of Lu (魯公). Yan Zhenqing’s ancestors came from Linyi (臨沂) in Shandong (山東). Yan was a leading Chinese calligrapher and a loyal governor of the Tang Dynasty. Yan Zhenqing is popularly held as the only calligrapher who paralleled Wang Xizhi, the Calligraphy Sage (書聖). He specialized in regular script(楷書) and cursive script(草書). In 752, he wrote one of his best-known pieces, Duobao Pagoda Stele (多寶塔碑). Magu Shan Xiantan Ji (麻姑山仙墰記) and Yan Qingli Stele (顏勤禮碑) are also very famous. His writings especially his regular scripts have widely been used as models for learning calligraphy for the last 1500 years.

During the rebellion of An Lushan (安祿山), Yan Zhenqing’s cousin Yan Gaoqing (顏杲卿) served as magistrate of Changshan (常山) in Hebei (河北). When rebel forces invaded the area, the Tang army did not come to the rescue, resulting in the fall of the town and the killing of Yan Gaoqing and his son, Yan Jiming (顏季明). It was under these circumstances that Yan Zhenqing at the age of 49 wrote “Draft of a Requiem to My Nephew” (祭姪文稿). Yan was a man of loyalty and integrity all his life, and this spirit is revealed in his calligraphy.  During the revolt of Li Xilie (李西烈), Yan was instructed to bring an imperial communique to the rebels. However, he was detained and executed in 785.

Lanting Xue (Preface to the Orchid Pavilion) (蘭亭序) is revered as the first best work in running script ever written.

Draft of a Requiem to My Nephew (祭姪文稿) is revered as the second best work in running script ever written.

Han Shi Tie (寒食帖) is revered as the third best work in running script ever written.

Jiǔ Huā Tiē (韭花帖) is revered as the fifth best work in running script ever written.

Poem of the Hall of Pines and Wind (松風閣詩) is revered as the ninth best work in running script ever written.C

https://www.youtube.com/watch?v=wvwwswqOgWs 20130722《殷瑗小聚》中國美術史–宋代書法家:黃庭堅) (Excellent presentation on this masterpiece from the beginning to 10:24)