Along the River During the Qingming Festival (清明上河圖) (Part 4) : Horizontal Panorama

In this part, I wish to talk about:

Another point of view

In Part 3, I mentioned Qingming can simply mean ‘peaceful and orderly’ making the scroll’s title meaning ‘Peace Reigns over the River’. After some private communications with a few friends, there is another point of view about the scroll. The artist Zhang Zeduan (張擇端) might want to show that the city was in chaos instead of being in peace and harmony. 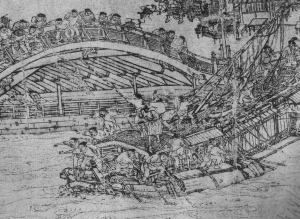 The river was cluttered by all sorts of boats, with a lot of people abroad. The boats appear to be overloaded as the decks of the boat were close to the water.  The boat before the Rainbow Bridge showed how unskilled the boatmen were. The crash that was about to happen was Zhang Zeduan’s (張擇端) hint to Hui Zong (徽宗) of the country in great danger. 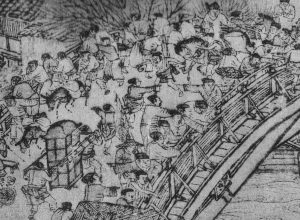 The stalls on the Rainbow Bridge were blocking the traffic, and there is an impasse right at the top between a sedan and rider. This sort of blockage on a carriageway might be common during Hui Zong’s reign. 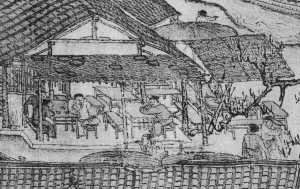 Most of the shops did not have customers. The teahouses or restaurants have few customers. This might indicate that the economy was at a low point.

The city was sacked in 1127 and both Hui Zong (徽宗) and Qin Zong (欽宗) were captured by the Jurchens (女真族) or Jin (金) and taken to Manchuria in the Jingkang Incident (靖康之變).

Understanding the execution of long scrolls

The room has three walls and each wall are painted with numbers. A photograph was taken outside this room and it looks like this. 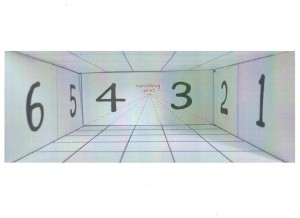 If the camera is right at the middle of the room, the three walls are photographed individually and the three photographs are joined together, the image looks like the panoramic photograph below.

Nowadays most digital camera can take panoramic photographs by shifting the position of the camera horizontally and steadily using a similar principle.

To study more about perspective, I strongly recommend ‘Basic Perspective for beginners’ by Brenda Hoddinott http://www.drawspace.com/lessons/view/e01

The paper cups representing houses (or hills) along an undulating river.

Imagine the photographer moves along the river and takes photos of four buildings at one time.

The photos are joined together into a panoramic long scroll. There is no single vanishing point. The vanishing point moved along as your eyes move along the panorama. In other words, in the panorama there is a ‘mobile focal point’ or a ‘shifting prospective’. This is known as ‘Sàn Diǎn Tòu Shì’ 散點透視 in Chinese.

There are pros and cons of drawing the scene in this panoramic manner. Each building can be seen clearly but the actual spatial relationship of the buildings is lost.

Chinese artists emphasize on the shifting perspective. They want to break away from the restrictions of time and space and to include in their pictures things afar as well near. This is as if the artist is walking along a river or in a field as he paints, seeing everything clearly on the way.

I would like to thank Dr Richard Wu for his kind advice and guidance. Dr Wu is a practising psychiatrist, an artist, an art historian, a calligrapher and a connoisseur of fine art. He lectures on fine art and art history at prestigious institutions like Art Gallery NSW. He is based in Sydney.

I would like to thank Professor P Lam, my mentor for his guidance and encouragement.

http://www.nytimes.com/video/arts/design/100000000727164/ancient-chinese-art.html  (Maxwell Hearn, the new head of Asian Art at The Metropolitan Museum of Art, demonstrates the ancient art of understanding and appreciating Chinese scroll paintings. Hearn says the viewer is meant to “walk” through the painting.)

4 thoughts on “Along the River During the Qingming Festival (清明上河圖) (Part 4) : Horizontal Panorama”