In his inscription, Liu Bingheng commented that the painting was an imitation of Dong Qichang’s work.  These days, known works of Dong Qichang can be found in books or on the website.  I cannot recall a similar painting by Dong.  In my humble opinion, the painting is more likely to be an original composition by Chen.  I found his brush strokes are as good as Dong’s.

Chen Tinglan (陳汀蘭), also known as Chen Jingyu (陳景庾) and Chen Shu (陳舒), was born in 1918 (戊午年). He graduated from Guangzhou Municipal College of Art (廣州市立美術學校) when Li Yanshan (李硏山) was the Headmaster from 1932-1936. Chen and his fellow school mates organised Mián Shè (棉社), an association for studying and exploring fine Chinese painting.

Around 1940 Chen went to Kwangchouwan (廣州灣), now Tsankiang (湛江) and taught at a local secondary school. During 1943 to 1945, his former Headmaster Li Yanshan also stayed in Kwangchouwan. Chen reunited with Li and furthered his studies of painting with Li.

After the Second Sino–Japanese War in 1945 Chen migrated to Hong Kong and again reunited with Li. Chen became a very close friend and personal assistant of Li who accompanied Li day and night (日夕追隨的得力助手).

In November 1949 Chen and Li together with Wu Zifu (吴子復) organised a Joint Exhibition of Chinese Painting and Calligraphy in the Art Gallery of Hotel Cecil, Hong Kong (香港思豪酒店) (now Alexandra House (歷山大廈).

In 1959 Li Yanshan was hired as the Head of Fine Art Department (藝術系主任) of Wah Kiu College (Hua Qiao Shu Yuan 華僑書院) and Chen was also hired as Head of General Affairs and the Professor of Shanshui Painting (山水科教授).

Chen was a modest artist and scholar and had kept a very low profile. His expertise was traditional Chinese landscape painting especially on silk. He went missing around 1960.

In the Joint Exhibition by the faculty and students of the Fine Arts Department of Wah Kiu College in 1961, Chen’s name was not on the list, Chen might have already gone missing by that time.

Ip Chit Hoo was a very close friend of Chen. Chen visited Ip’s studio at St Louis School, Hong Kong from time to time in the 1950s. Chen told Ip that on an autumn day in 1960 (庚子年) he showed Li Yanshen his painting Misty Mountains (雲山煙雨圖), Li was overwhelmed with joy and extremely pleased with his most beloved student. Unfortunately at that time the painting on silk had not been mounted as a handscroll or else Li Yanshen would have written a colophon for the painting. But Li immediately executed a landscape painting on a piece of paper for Chen to show his joy and appreciation. The painting was named Hermit in a Mountain with Streams (溪山高隱). Both the painting and the inscription in cursive script show rich and unpretentious brush-strokes of extremely high skill and expertise. This is indeed one of the very best late works of Li before he passed away in 1961. 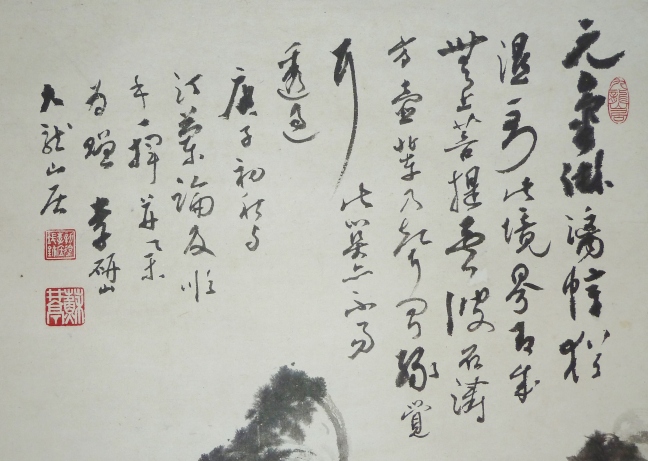 Translation: With spontaneous ink tones and brushstrokes the mountains are very moist. When one reaches this stage he is well accomplished. Painters like Shitao 石濤 (道濟) and Fanghu 方方壺 (方從義) were fortunate to attain such accomplishments. This is a barrier difficult to surpass. In early autumn of the year Gengzi (1960) I discussed this with Tinglan and casually painted this for him. Li Yanshan at Nine Dragon Mountain Dwelling.

One day Chen told Ip he was sad and depressed. He mentioned to Ip he would one day terminate his life by jumping into the sea from a ferry to Macau after drinking a bottle of brandy. Ip tried his best to comfort Chen. But after a period of time Chen went missing leaving his family behind and some masterpieces of fine art.  (Source: conversation with Mr Ip circa 1990s)

The following image was reproduced from page 78 of 太乙樓所蔵近代名家画集 (1987) which showed a painting of Chen. The painting had not been signed. Liu Bingheng (劉秉衡) wrote an inscription in 1968 and stated that the painting was painted by Chen.

Chen had the habit of not signing his paintings. He did not care about selling his works. He painted just for his own satisfaction and the pursue of fine art. He is a real artist! 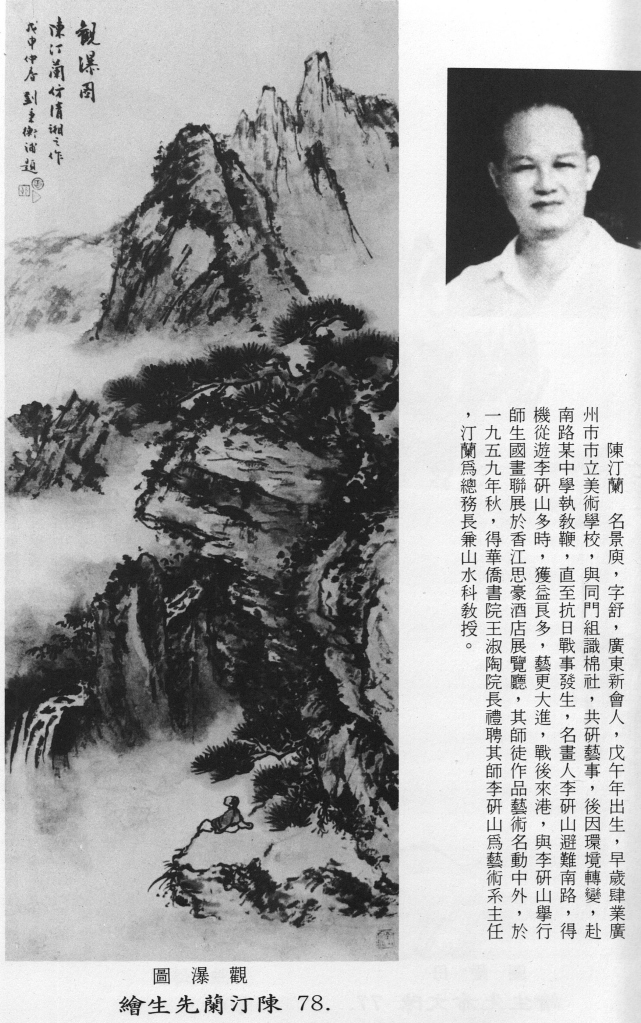 In his inscription, Liu Bingheng claimed that the painting was an imitation of Shi Tao’s work.  I cannot recall a similar work by Shi from images of his known works in books or on the website. Again, I think the painting is likely to be an original composition of Chen.

Other major works by Chen Tinglan

Chen seldom signed his paintings but this painting is an exception. The inscription on the painting was written by Chen himself. 庚子 (1960) 端午前三日 陳汀蘭作. This is very rare and precious.

The label outside the hanging scroll was written by Chen Zhujun 陳竹筠 in 1960.

A label outside the hanging scroll written by Ip Chit Hoo.