The full name of Zhang Qian Bei 張遷碑 is 漢故穀城長盪陰令張君表頌 (Hàn gù Gǔ Chéng zhǎng Dàng Yīn lìng Zhāng Jūn Biǎo Sòng). The stele was erected during the Eastern Han, 186 CE. The text at the front has 15 columns, with each column contains a maximum of 42 characters, the last column only contains 12 characters. The stele was unearthed in Dongping, Shandong province  (山東東平縣) during early Ming Dynasty about 600 years ago.  The stele is now preserved in Daimiao Temple, Tai’an, Shandong province (山東泰安岱廟).

The ancestors of Zhang Qian (張遷) held important offices in the government of the Han Dynasty. They were virtuous from generation to generation. Zhang Qian treated his parents and grandparents with filial piety and other people with reverence. He also held significant office in the government. He was an upright official with good strategic administrative skills. He served as the county magistrate of Gucheng (穀城縣長) for eight years. He was diligent and cared for the people. The people enjoyed peace and prosperity and had a great rapport of him. Zhang Qian was later appointed as the magistrate (縣令) of Dangyin County (蕩陰縣). The people of Gucheng (穀城) farewelled him and erected a stele to commemorate the achievements of Zhang Qian.

The text of the stele is as follows:

The shape of the characters of Zhang Qian Bei is square and robust (剛健). The strokes are sharp and angular (稜角分明). This style of writing is called fang bǐ (方筆 ‘square brush’). Fang bǐ  is prominent mostly in the beginning and the end of each stroke.  At the turning point, the stroke of the brush changes abruptly, forming a stroke with edges and angles, like a knife cutting an axe. The fang bǐ is more commonly used in clerical script and regular scripts.

Another style of writing is called yuan bǐ (圓筆’round brush’). The lines are more slender and smooth. Some strokes are undulating having a smoothly rising and falling form of outlines. The shape of the character is less square and more rectangular or oblong (長方或橢園形). Cao Quan Bei (曹全碑) is a typical example of yuan bǐ style of writing, a ‘beautiful and shapely’ style.

Some more characters of Zhang Quan Bei and Cao Quan Bei are put side by side for comparisons. 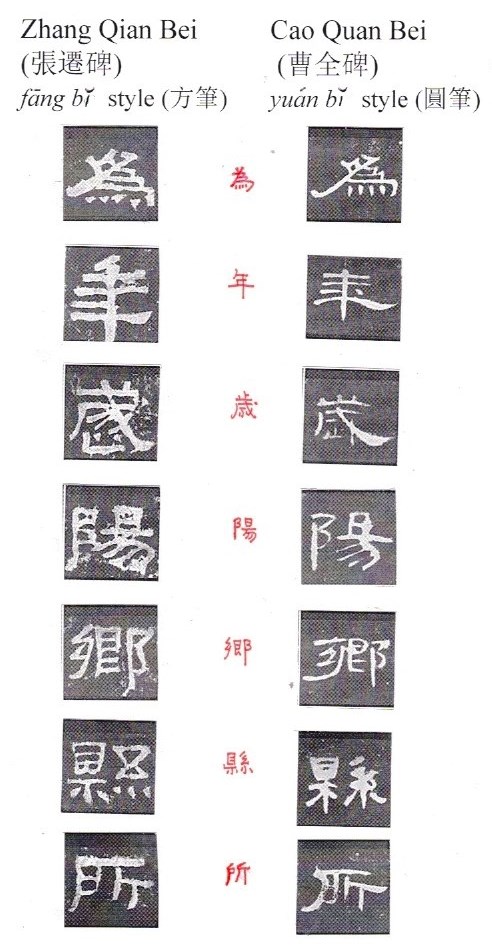 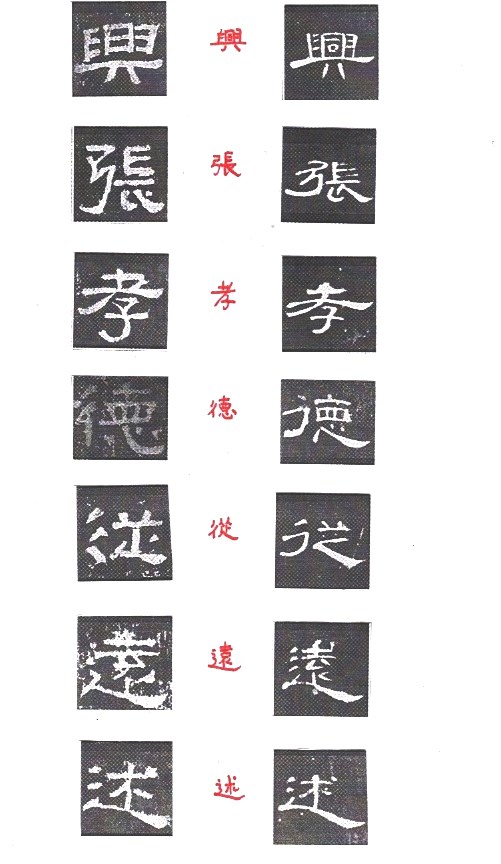 My copy of the stele is as follows: 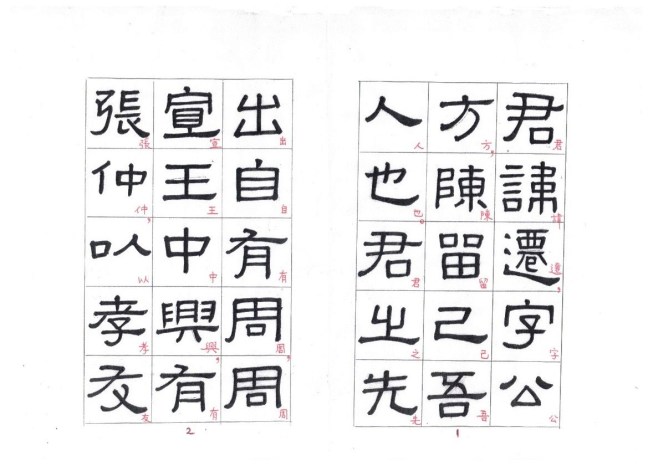 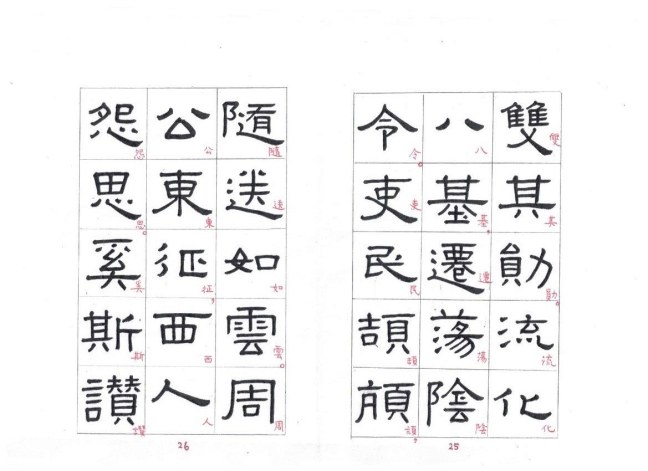 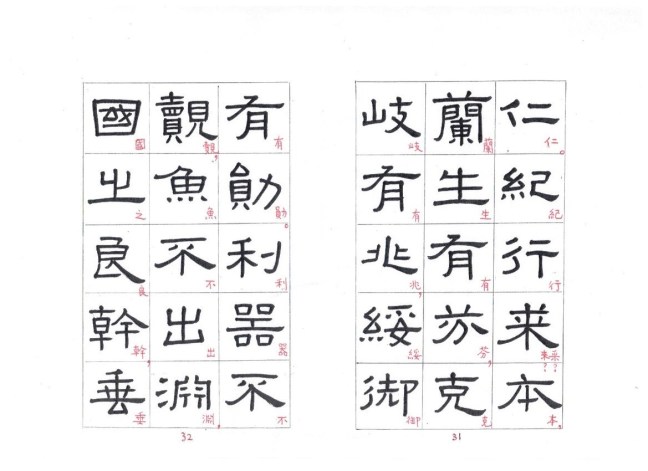 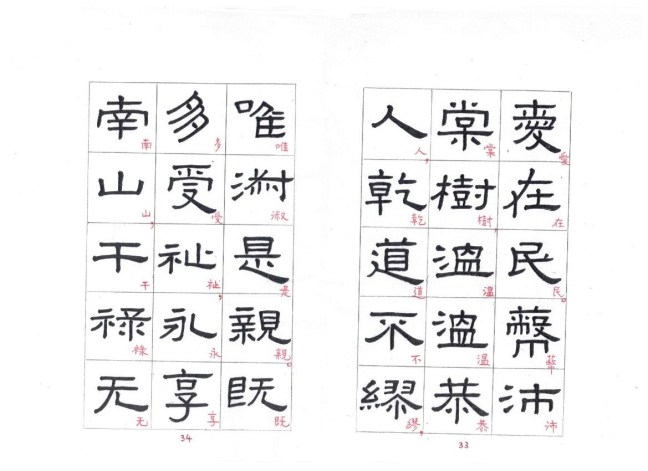 Professor WONG Wai Cheong (黄維琩教授)(1902-1993) was an scholar of Han Bei (漢碑). He was an expert of both Cao Quan Bei (曹全碑) and Zhang Qian Bei. The followings are fine examples of his writings of Zhang Qian Bei.

He Shaoji (何紹基)(1799-1873) was a great scholar and calligrapher in the Xing Dynasty. Please visit the following links to see his writings of Zhang Qian Bei.

The characters of Zhang Qian Bei are almost square, neat and massive like rock and mountain cliff. Deltoid and rectangular shapes are also interspersed to make a sharp contrast and set off one another with fun and excitement.  It takes time to appreciate the hidden beauty and the elegance of this primitive and robust style of Calligraphy.

One day a customer went into a stationery shop and asked for a fang bi (方筆 square brush) and a yuan bi (圓筆 round brush). The shopkeeper looked puzzled and told the customer that she only sold brushes of various sizes with fine tips.  Another customer heard the conversation and laughed. He then told the customer that fang bi and yuan bi were the two different techniques of writing, not the stationery itself. Both techniques could be executed with a single ordinary brush. 😅