Su Shi (蘇軾) (1037 – 1101) was a great scholar and had a very unstable career as a government official. In 1079 Su was falsely accused in Wutai Poem Incident (烏台詩案) and exiled to Huangzhou (黄州). This marked a turning point in his life.  While he experienced great hardship in life, most of his great literary achievements were composed around this time.

The Ode depicted Su and his friends travelling on a small boat to visit the Red Cliffs just outside Huangzhou in an autumn night in 1082. He recalled the Battle of Red Cliff (Battle of Chibi 赤壁之戰) in 208 AD. It was a fierce battle between the allied forces of the Southern warlord Liu Bei (劉備) and Sun Quan (孫權) and the numerically superior forces of the Northern warlord Cao Cao (曹操). Liu Bei and Sun Quan defeated Cao Cao’s army to conquer the land south of the Yangtze River. The event that happened over 800 years ago made Su thought about the rise and fall of great historical figures, the brevity of life and the hypocritical nature of people. He wrote about his philosophical views on the certainty of change in life. 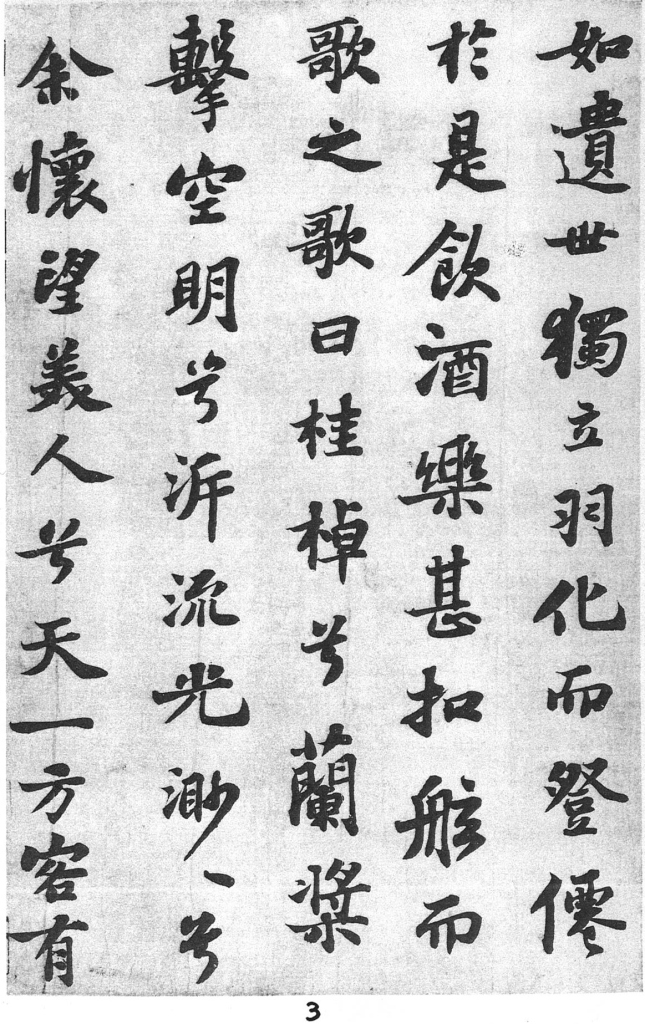 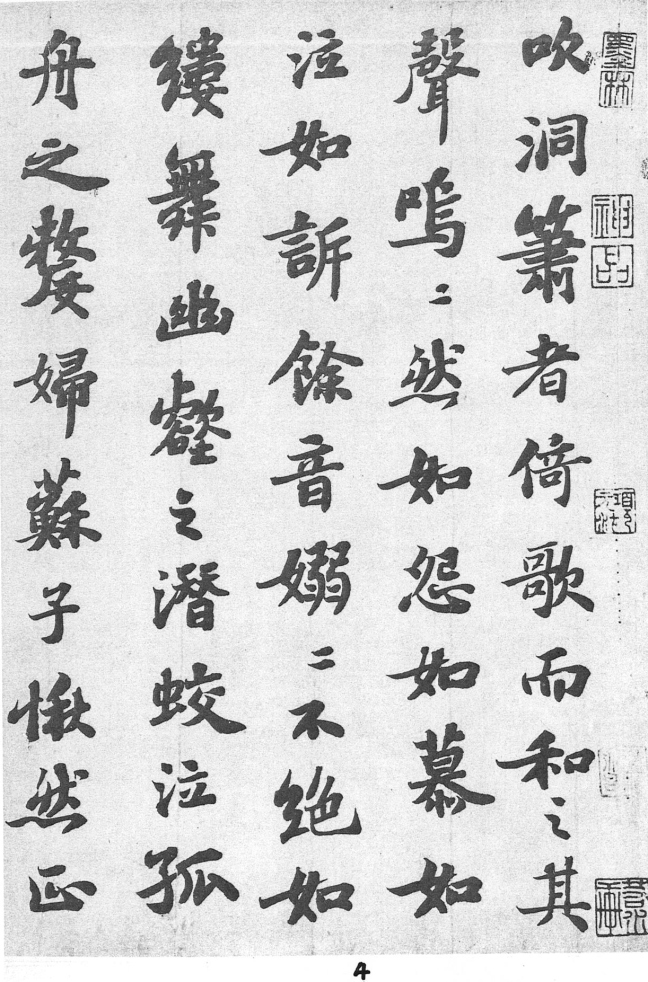 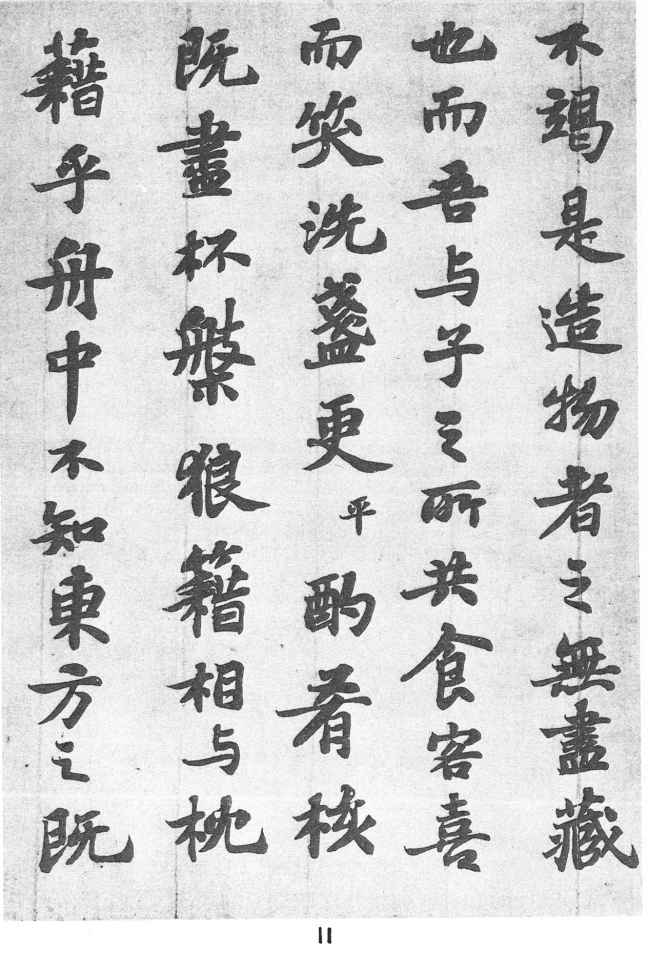 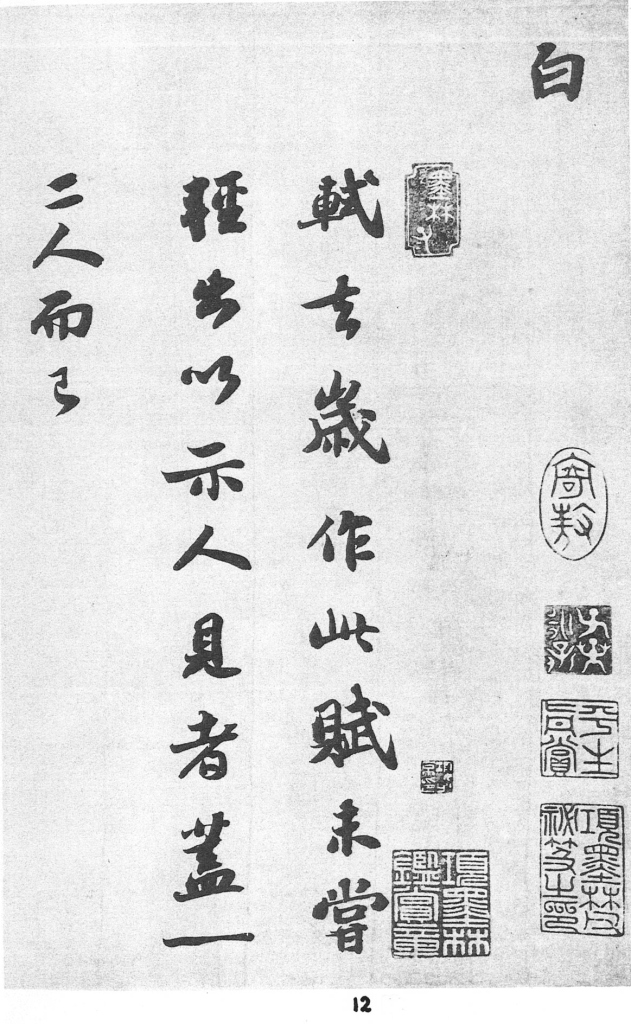 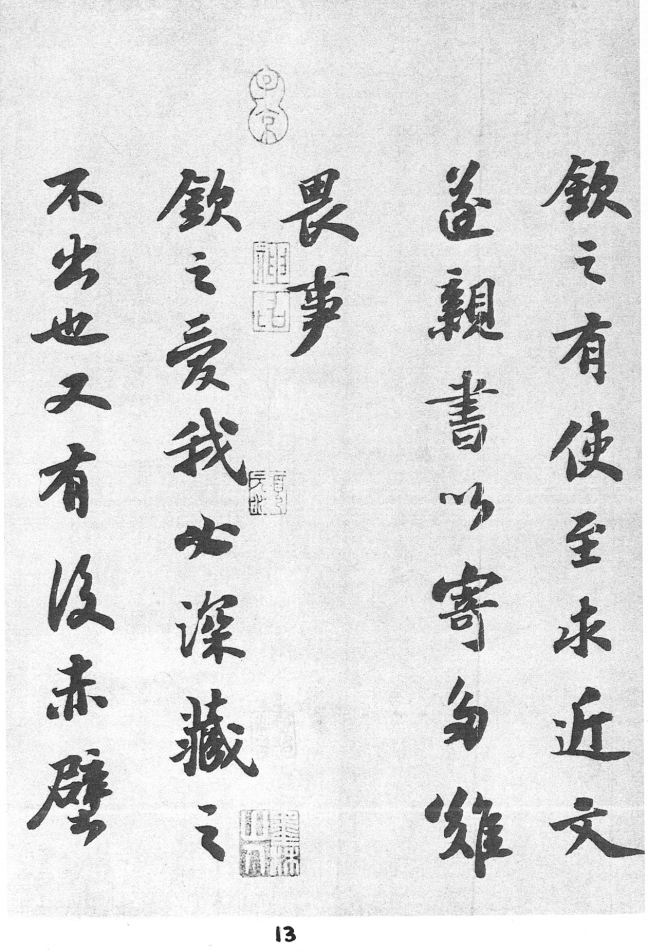 This Ode was written in 1083 on the invitation of Su’s friend Fu Yaoyu (傅堯俞, 字欽之)(1024 – 1091). Su was 48 years of age. From Su’s particular reminders of ‘living in fear for more troubles 多難畏事’ and ‘by your love for me, you will hold this Ode in secrecy 欽之愛我, 必深藏不出已’, this shows Su’s fear of being misinterpreted and further offended the Emperor.

It was the 7th month in the autumn of the year Ren Xu when the full moon was just a little on the wane, I, Su Shi, went boating with my friends in the river near the Red Cliff. (The date may be Day 16 or 17 in the 7th Lunar Month.)

A fresh cool breeze was blowing, too gentle to ripple the water. Raising my cup, I toasted my friends, recited and chanted the verses on the Bright Moon from Classic of Poetry (Shijing 詩經).

A little later, the moon rose from behind the eastern mountain and began to roam between the Southern Dipper and the Ox (Altair). White mist heaped up across the river, and the moonlight stretched far into the horizon to merge with the hues of the sky.

Like a piece of reed, our boat drifted on a boundless expanse of water, so vast that we felt as if we were riding in the wind, not knowing when to come to a halt. We felt so ethereal as if we were ascending into heaven and becoming winged immortal.

Then we drank wine, feeling exhilarated, tapped the side of the boat and sang the song:

“Oh, the oars and paddles made from timber of Artocarpus (桂木) and magnolia (玉蘭), splashing in the clear water, and the boat sailing up the moonlit river. Unbound is my mind, longing for the virtuous man in my heart who is beyond the remote horizon.”

A Xiao (flute) player among the friends accompanied the verse. The music kept streaming out and lingering in the air, so melancholic that it sounds like a continuous sigh of sorrow or like a ceaseless weep with grief. The lingering sound was as unbroken as silk, capable of enticing a dragon perched in a deep abyss to rise and dance, or making a widow in a solitary boat to weep.

Sitting up, I, Su Shi in a serious tone, asked the player, “Why is the music so sombrely stirring”

The friend replied, “‘The moon is bright, the stars are sparse, the crows are flying south.” Isn’t this the poem of Cao Mengde? The place we have now reached faces Xiakou to the West and Wuchang to the East, and is heavily enshrouded by verdant mountains and stretching water. Isn’t this where Cao Mengde was besieged by Zhou Yu?

At that time Cao took Jingzhou, seized Jiangling, and then rolled eastward down the Yangtze River in warships chained up for over a thousand miles, with flags and pennant flaunting in defiance of the vast open skies. Cao drank with pleasure before the river and composed his poems with his lance resting on his lap. Cao was indeed a hero for his generation but where is he now?

You and I are fishing in the river, gathering firewood in the islet, with fish and shrimp as our companions and milu (deer) as our friends, and riding a boat while drinking from our simple gourd cups.

We are like mayflies wandering in this terrestrial world or a grain of millet drifting on a deep ocean. What a short life span we have, yet how endless the Yangtze River is!

I wish we could travel with flying immortals in heaven or hold the bright moon in my arms through eternity. I know this is not something easily obtainable and therefore I can only leave the melancholy (flute) music to the desolate (autumn) wind.”

I, Su Shi commented, “Do you happen to know the nature of water or the moon? Water is always on the run like this, but never lost in its course; the moon always waxes and wanes like that, but never out of its sphere.

When viewed from a changing perspective, the universe can hardly be the same even within a blink of an eye,

But when looked at from an unchanging perspective, everything conserves itself, and so do we. Therefore, what’s in them to be admired?

Besides, in this universe, everything has its rightful owner. If something does not belong to you, then you shall not even have a bit of it.

Only the refreshing breeze on the river and the bright moon over the hills are an exception. If you can hear it, it is a sound to you; if you can see it, it is a view to you.

It never ends and is never exhausted. It is the infinite treasure granted to us by our Creator for both of us to enjoy.”

My friends were gladdened and smiled. We had our cups rinsed and refilled. Soon all the dishes and fruits were gone With plates and cups left scattered all over, we leaned against each other and felt asleep right in the boat, unaware that it was dawning in the east.

Take the above two characters 窈窕 for example, Su’s characters are broad and tightly written. The brushstrokes are full and smooth, showing that Su had achieved perfect harmony between the elegant flow in the style of the Two Wang Masters (王羲之、王獻之) that he learned in his early years, and the more heavy simplicity in the style of Yen Zhengqing (顏真卿) that he learned in his later years.

The left part of the character is low and the right part is high. The characters are a bit flattened. Huang Tingjian (黃庭堅) and Su Shi were great friends. One day, Su said to Huang, “Although your characters are fresh and bold, sometimes too thin strokes seem like a snake hanging on the tree (幾如樹梢掛蛇).”  Huang answered Su, “Although I dare not make improper comments on your characters, sometimes I feel those characters are fat and flat like the toad pressed under a large rock (石壓蛤蟆).”  In fact Huang regarded Su as the best calligrapher at that time.

Su’s writing is robust, graceful as well as dignified, smooth and elegant.

In learning from Yan Zhenqing, Su succeeded in capturing Yan’s spirit even though he did not copy his calligraphic form.

The Location of Chibi

The Red Cliffs that Su visited were in Huangzhou (黄州), not the site of the Battle of the Chibi.  Because many parts of the course of the Yangtze River have changed over the centuries, the exact location of the Battle site cannot be located with precision. Scholars believe that the actual Battle field is at Puqi (蒲圻). 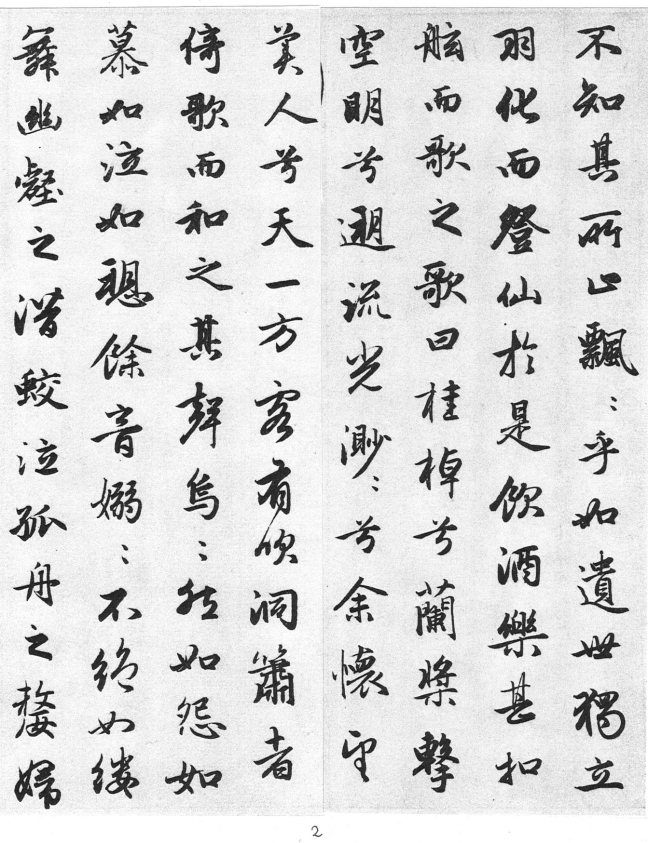 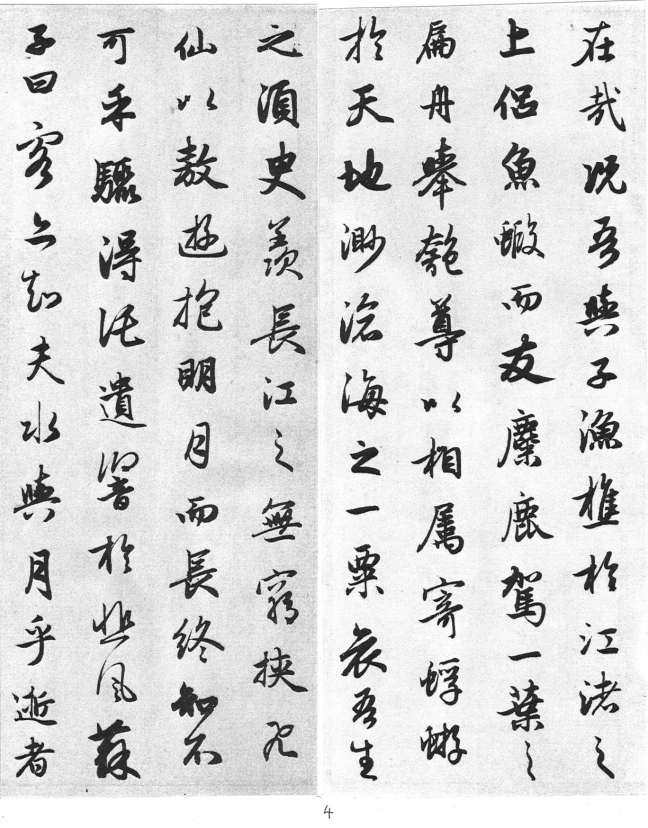 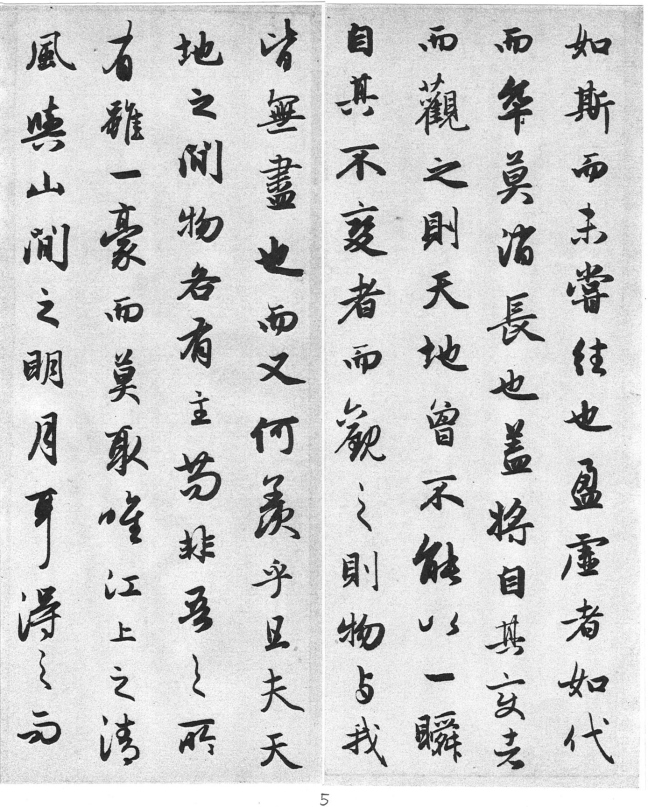 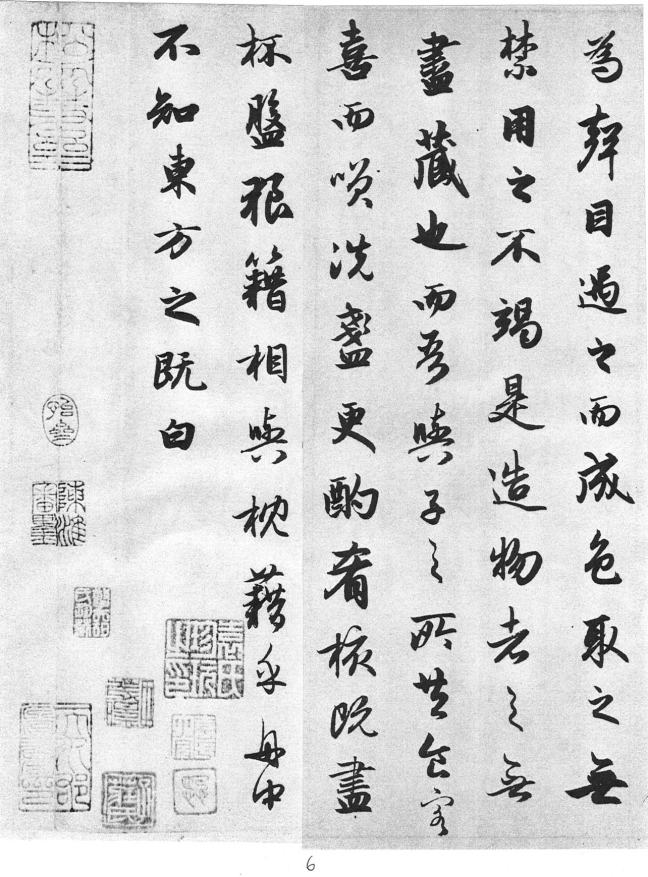 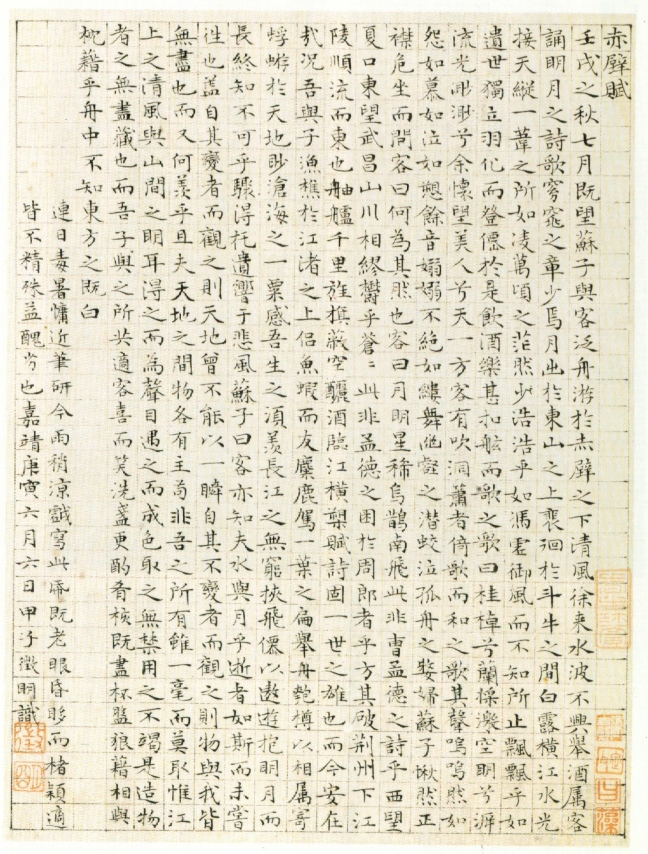