The human figure as a subject in Chinese painting has a much longer history than flowers-and-birds or landscape painting. Engravings of figures on rocks dated back to the Neolithic period (c 6500-1600 BCE). Early figure paintings have been found on rocks, cave walls, tomb walls, coffins, pottery, wood, lacquer wares, and silk. They provide us with pictures of deities of the ancient belief or folk religion, hunting scenes, court ceremonies, processions, and war chariots.  The figure paintings were mostly drawn in profile of linear design without shadows or perspective. Archaeological discoveries offer a glimpse at the development of figure painting from the Warring States (403-221 BC) periods, to the Han dynasty (206 BC – AD 220), then the Wei and Jin era (265-420) and beyond.

The following attempts to show the development of Chinese figure painting in the last 2000 years. The paintings are arranged in chronological order of the year of birth of the painters.

This Female Figure, Dragon and Phoenix painting (人物龍鳳帛画) is believed to be one of the most ancient figure paintings on silk survived today. 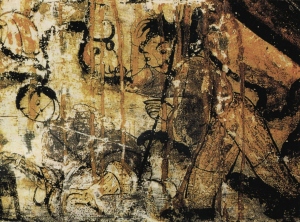 The Confucians set up the literary ideal. The virtuous people and scholars, not soldiers, were their role models. The people were taught to be loyal to the emperors.

The next development was the paintings that gave a narrative of stories.  There were illustrations that depicted stories. Not merely for serving decorative and aesthetic purposes, some paintings conveyed an educational purpose. For instance, Gu Kaizhi (顧愷之)(c344-406) painted The Admonitions of the Instructress to the Court Ladies (女史箴圖) with the text  of Zhang Hua (張華) to reprimand Empress Jia (賈后) and to provide advice to the women in the imperial court.

Buddhism was very popular in the Northern and Southern Dynasties (南北朝).  People donated substantial amount of money to build temples. Mural or fresco paintings in temples might have been very abundant at that time. Time and persecution have obliterated the art works.  Owing to the remoteness and dryness of the Gobi Desert, a large collection of fresco paintings survived in the cave monasteries at Dunhuang (敦煌). The majority of the fresco paintings were created in the Tang Dynasty.

Mural paintings in cave monasteries at Dunhuang (敦煌) are the masterpieces of Tang figure painting. The murals are extensive, covering an area of 46,000 square metres. The fully painted caves have paintings all over the walls and ceilings, with geometrical or plant decoration filling the spaces not taken by figurative images, most prominently of the Buddha.

Wu Daozi (吳道子)(c680-c740) created about 300 paintings in the temples of Luoyang and Chang’an. His brushwork was full of sweeping power and he painted chiefly in ink, leaving the colouring to his assistants. Wu was famous for the three-dimensional, sculptural effect he achieved with the ink line alone. Unfortunately his wall paintings have vanished and only a few of his sketches on silk and paper for the wall paintings survived.

Imperial Painting Academy or Hanlin Painting Academy (翰林圖畫院) was established in Five Dynasties and Ten Kingdoms.  It was under the direct administration of the imperial government. Painters of the academy enjoyed the same treatment as literary officials in courts. The academy gathered the most excellent painters in the country.

Gu Hongzhong (顧閎中) (937 – 975) was both an artist and a detective. The Emperor asked him to spy on Han Xizai’s lifestyle and Gu painted a long scroll Night Revels of Han Xizai  (韓熙載夜宴圖) depicting the night party of Han showing that Han indulged himself with music and dancing.

In the late Five Dynasties and Ten Kingdoms more adventurous brush technique was developed by such painters as Shi Ke (石恪) who developed ‘splashed ink’ (潑墨) or ‘ink and wash’ (水墨) painting. This style is also referred to as ‘xieyi’ (寫意), freehand style or literati painting (文人畫).

The Song Dynasty united China again in 960 and expanded the Imperial Painting Academy.  It gathered the great painters from the Five Dynasties. The skill of painting further developed and refined. Many masterpieces especially flower-and-bird paintings were produced in the Academy.

The Imperial Painting Academy reached its peak during the period from Emperor Huizong’s (徽宗宋) to Emperor Xiaozong’s (宋孝宗) of the Southern Song Dynasty.

Liang Kai (梁楷) of the Song Dynasty was also famous for his ‘splashed ink’ (潑墨) or ‘ink and wash’ (水墨) painting.

Liu Guando (劉貫道) was one of the famous artists in the Yuan Dynasty. Yan Hui (顏輝) and his followers painted both Buddhist and Daoist subjects in the traditional Song manner.

Tang Yin (唐寅) and Qiu Ying (仇英) were two of the most important artists in the Ming Dynasty. They followed the traditional Song manner. Chen Hongshou (陳洪綬) was skilled in painting peculiar human figures, landscapes, flower-and-bird. He utilized profound brushwork and precise colours, creating a new style in figure painting.

Figure painting was heavily influenced by western techniques brought by missionaries, in particular Giuseppe Castiglione (郎世寧)(1688-1766). Castiglione’s style was based on the emphasis on colour, perspective, and light found in Italian Renaissance art.

The subjects of the paintings included the ordinary people, not only court ladies, scholars, hermits, and emperors.

In the modern era, many painters learn western painting and developed new painting style based on a fusion of Western realism and traditional brushwork. Among these are Xu Beihong (徐悲鴻) and Fu Baoshi (傅抱石).

The subject matters are rich. The working class, beggars,  even nude figures are being painted.

Paintings for political propaganda are common in Mainland China. Many of the paintings were cleverly executed with striking effect.

People of the ethnic minority groups are also the subject of modern figure paintings.

I would like to thank Professor Peter Lam most sincerely for his kind guidance and advice on my webpages.